A robust blight strategy is more essential than ever as new blight strains continue to evolve. ...

Control strategies for late blight (Phytophthora infestans) are constantly developing as the pathogen causing the disease evolves and the available blight chemistry changes, either due to regulation or efficacy shifts due to fungicide resistance.

Overcoming issues such as these is a key part of the Hutchinsons’ blight trials, first set up in 1997. These are examining how both new and established fungicide chemistry compares at different stages through the season. The trials were initially hosted near Holbeach in Lincolnshire, but three years ago moved to a new site within the county, on Grade 1 silty clay loam to the east of Boston.

This year around 30 products will be compared across replicated 6m plots at the 1ha site planted with Melody. The trial is managed specifically to test products individually under higher blight pressure than might otherwise be found in the field.

To maximise disease pressure, the site is surrounded by a maize strip to reduce airflow through the potato crop and increase humidity. Crops are planted late (typically mid-late June) and mist irrigation is applied.

Plants with known blight strains, such as 13_ A2 and 6_A1, are then deliberately introduced early in the season.

“Melody is good for blight trials because it’s a susceptible, bushy, long-lasting variety that goes on growing later in the season,” explains trials co-ordinator Michael Rodger from Richard Austin Agriculture.

“With blight strains constantly changing, it’s important we see how products fare at different stages in the season so our agronomists can give the best possible advice to growers. For these trials we want blight pressure to be as high as it can be to push products, although it’s a very seasonal disease which can still be a struggle to get going in some years,” he explains.

In-season tissue analysis allows agronomists to identify which blight strains and genotypes are present at given points through the year and this improves the understanding of disease development and control, adds Michael.

Notably the past two seasons have seen the 36_A2 blight strain become more dominant, even though the trial was not inoculated with it, he says. It echoes a trend that’s been seen in other blight trials in different parts of the UK.

“36_A2 is more aggressive than 13_A2 or 6_A1 and came in really fast last year, even when there was relatively little rain but just enough humidity. We’ve not seen the 37_A2 fluazinam-resistant strain in these trials yet, but it’s another that has got to be considered when planning strategies.”

Results to date clearly reinforce the importance of monitoring local conditions carefully and being prepared to manage the potential risk with targeted chemistry and tight spray intervals, from planting right through to harvest, he comments.

“It’s essential to establish a clean canopy early on and keep it that way through the season. Blight can never be overlooked, even when crops are on the way out at the end of the season and there may be a temptation to miss out later blight sprays,” he says.

Farmacy agronomist Richard Daubney hosts the trials on his farm. He says the results suggest some blight products that are deemed to be in the middle to higher tier in terms of efficacy, haven’t been as robust as anticipated in certain situations.

In particular, some products based on single-site active ingredients have shown clear benefits from the inclusion of cymoxanil to broaden the efficacy against different blight strains, especially those that are more virulent and able to sporulate in just three to four days, which is far quicker than ‘traditional’ strains, he says. 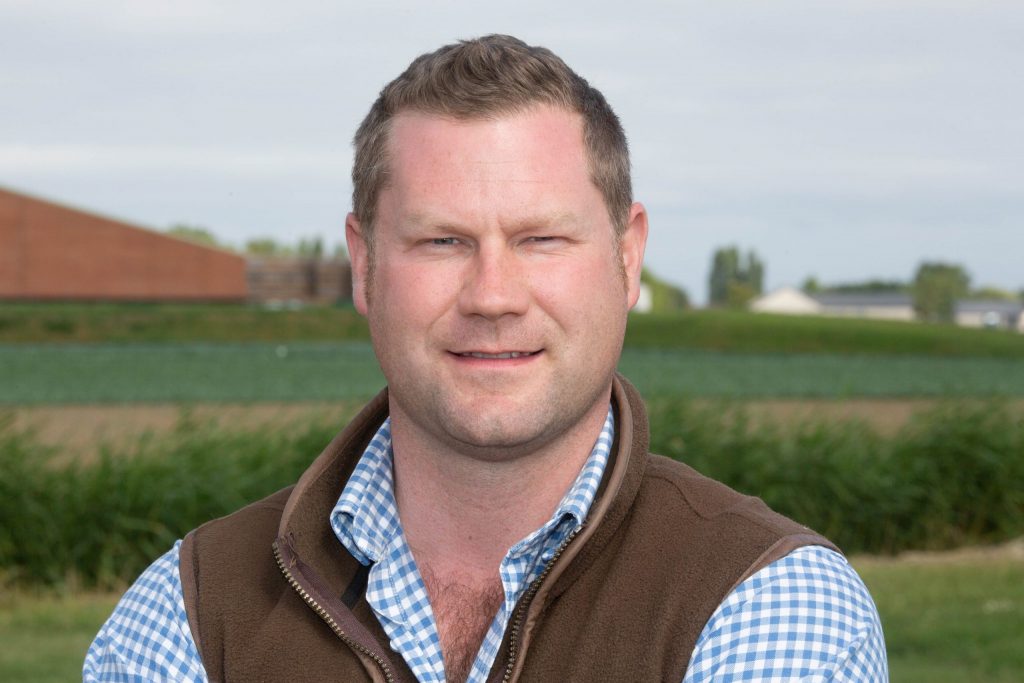 Richard highlights that this is particularly true in the first half of the season, when crops are growing rapidly and require preventative and curative control from actives with stronger systemic action. The inclusion of cymoxanil or mancozeb makes good sense from a resistance management viewpoint as well, he adds.

“A lot of the mid-tier fungicides don’t contain mancozeb, so including it at times through the programme makes good sense for managing resistance and for protecting against alternaria, which can be an issue in certain varieties and stressed crops.”

He also suggests keeping to recommended rates rather than being tempted to reduce rates, which he says can increase the risk of resistance. Richard advises that blight programmes are tailored to individual crops and disease risk but his general approach, depending on pressure, is to begin the season with cymoxanil and mancozeb-based products. In higher-pressure situations he moves to cyazofamid or fluopicolide+ propamocarb, which importantly offer a degree of tuber blight activity.

“Remember to save applications of cyazofamid and fluopicolide+ propamocarb products for the desiccation period, as with the fluazinam resistance issues there are limited actives that offer any tuber blight protection,” he notes.

Two consecutive applications of oxathiapiprolin (as in Zorvec Enicade) during rapid canopy development provides a useful option since the spray timing often coincides with the first irrigation at tuber initiation. Its longer 10-day spray interval makes logistics slightly easier than having to apply three sprays at seven-day intervals. At this time Richard would also include mancozeb to provide some alternaria control where necessary.

Once into more stable canopy development, there’s more flexibility in product choice in mid-tier blight fungicides, which include products based on mandipropamid, cyazofamid and benthiavalicarb+ mancozeb. The key is to alternate actives and tailor options to variety, weather and disease risk, he says.

Both agronomists stress the importance of maintaining tight spray intervals throughout. “Unless it’s extremely dry and disease risk is very low, I would never veer away from a seven-day interval (10 days in the case of Zorvec) and may reduce it to five if blight pressure is exceptionally high,” says Richard.

Staying with a standard seven-day interval can also help with management logistics by maintaining a clear pattern of work each week, which can be disrupted when switching between longer or shorter intervals.

This approach has to be balanced against blight risk, he adds.

He emphasises the importance of protecting crops right through to harvest – something that’ll become even more important given desiccation could take longer without diquat. This will include the use of products with stronger tuber blight activity, such as those based on cyazofamid or fluopicolide.

“The potato crop is too valuable to take any chances with blight, so it really has to be a zero-tolerance approach all the way.”

Protecting earlies and maincrop in Cornwall

Blight programmes for early varieties grown under plastic have already been underway for a month in the south west, where Cornwall-based Hutchinsons agronomist, Amie Hunter, stresses the importance of maintaining robust control from the outset.

“The whole country has shifted towards starting blight sprays earlier in the season as the traditional timing of waiting until the haulm meets along the rows has long gone,” she says.

Growing potatoes under plastic inherently increases blight risk in crops, and once plastic is removed in early April, it can potentially increase the risk to emerging field crops if conditions are conducive to the disease. Early use of stronger chemistry and tight spray intervals is therefore key, she says.

Products with good zoospore activity, such as those based on cyazofamid, are typically applied to first earlies soon after the plastic is removed in early April, with programmes then going straight into chemistry with good protectant and curative activity.

“Product choice really depends on the weather and individual crop risks, but the critical point is the spray interval, which I prefer to keep to seven days maximum in most situations and may reduce to five if blight pressure is very high. The main exception is when applying oxathiapiprolin at full rate, which has a 10-day interval.”

Many open-ground crops receive the first blight fungicide at around 100% emergence, although it may be earlier if risk is very high and emergence is uneven, says Amie. “If blight is present in early crops grown under plastic, later crops could emerge straight into a high-pressure situation, so these have to be treated straight away.”

Her approach is similar to the earlies, with an initial focus on products with proven zoospore activity (e.g. cyazofamid) before moving to actives with more systemic action.

“Crops get into the rapid canopy phase very quickly, so we need that chemistry early in the programme,” she says.

Spray intervals are generally kept to a maximum of seven days, with product choice tailored to conditions and disease pressure. Once canopy development stabilises, Amie explains there’s more flexibility with product choice, depending on blight risk. For example, in low pressure situations, cymoxanil-based products may be suitable, while stronger chemistry is favoured where blight risk is greater.

Alternaria can be an issue in seasons where crops are under stress, especially in susceptible varieties such as Markies. This is best addressed by including mancozeb and/or difenconazole in spray programmes where necessary, she suggests.

Amie advises growers to maintain robust blight programmes through to the end of the season, and for early varieties lifted with green tops it’s important to be aware of harvest intervals on some fungicides, such as cyazofamid which has a seven-day interval.

“Fluazinam was a very useful option in green top crops as there’s no harvest interval, however with the development of the 37_A2 fluazinam-resistant blight strain, it’s not something we can rely on for late blight control, although it’s still good on sclerotinia.”

Harvest intervals are not a concern in maincrop potatoes, although an extra blight spray is likely to be required for tuber blight control where desiccation takes longer without diquat. She favours cyazofamid at the end of the season and believes fluopicolide+ propamocarb is also effective but may be better positioned earlier in the season.

A new co-formulated fungicide for the prevention of late blight has been registered in time for use during the 2020 growing season. Zorvec Endavia is a liquid combining oxathiapiprolin with benthiavalacarb in a single five-litre bottle, providing protection from late blight for up to 10 days after application.

Oxathiapiprolin was launched by Corteva Agriscience as Zorvec Enicade in 2018 and, sold in co-packs. According to Alister McRobbie, category manager for potatoes at Corteva, the strengths of the active ingredients create a protectant and curative product with demonstrable movement into new growth.

“Trials of the co-formulated product have shown fantastic performance in the control of late blight, and we expect it to be a hugely valuable tool for UK and Irish potato growers in managing the increasingly aggressive strains of late blight now present.”

The co-formulation with benthiavalicarb enables users to target Zorvec Endavia at the rapid growth phase of the programme where the properties of Zorvec will be most effective, providing growers with the cleanest possible start to their programme.

“Zorvec Endavia provides the same market-leading protection in a single bottle for those looking for an alternative to co-packs,” he adds. “The inclusion of a second active ingredient provides important protection against the risk of resistant late blight strains developing.”

Zorvec Endavia can be applied to potatoes at 0.4 l/ha up to four times during a season, but application is limited to three sprays in a block. The new product also has a label claim for downy mildew in onions, shallots and garlic, though application rates and restrictions differ for each crop.