Maize growers and contractors from across the north west gained an insight into the latest varieties and growing techniques when Hutchinsons opened the doors to its Carlisle Regional Technology Centre...

It is the 12th year that Smalmstown Farm has hosted the maize trials, which are tailored to finding new ways of maximising output from maize grown under film and open ground in the more marginal growing conditions often experienced in northern and western parts of the country.

“Although conditions have generally been pretty good this year, our climate in this area can be less conducive to warm-season crops,” explains Hutchinsons agronomist Jim Clark.

“Many growers establish maize under film to mitigate some of the early season risks from cooler spring temperatures, but the technique creates its own challenges and requires considerable investment. Therefore, maximising crop output is vital to secure the future of maize growing in such areas.”

One feature that generated particular interest among visitors was the trial of crops established under a new narrow-row version of a 100% biodegradable film.

Mr Clark said plots grown under the standard double-row Bio film system had performed best in 2020 and visually plants looked bigger this year, possibly because the faster film breakdown meant developing plants were not being held back by film sitting over the leaves.

However, with an upfront cost of around £60/acre more than conventional film, he acknowledged the system was more expensive, so was keen to trial the narrow-row version to reduce costs.

“We like the fact that it uses less film, is better for weed control and for sowing grass into, however I’m not convinced crops have the same bulk.”

Soil temperature assessments earlier this season indicated narrow row plots were 4-5C cooler than soil under the standard double-row film, which may have slowed crop development, he said.

“They were all sown on the same day and all came up quickly as there was moisture in the soil. However once we got to about week three, differences started to emerge when the double-row maize seemed to grow away faster. It’ll be interesting to see whether that difference shows up in harvested yields.”

It could be possible to combine narrow-row film with a starter fertiliser to negate lower soil temperatures, although more work was required in this area, Mr Clark continued.

Two starter fertilisers were examined in a separate trial at the Carlisle site this season, and he said there appeared to be a clear benefit to maize grown under film.

Plots of P7034 were sown on 16 April under Samco green film using a specially modified drill fitted with a micro granule applicator. The starter fertilisers compared were the ammonium phosphate-based Primary-P and a developmental product called Biolite.

“We’ll know more once crops have been harvested and yields analysed, but so far we’re definitely seeing similar results in terms of crop development to last year, when plots that received the starter fertiliser established quickly and looked physically bigger than untreated maize.”

Starter fertilisers could also negate the risk of root scorch occurring when granular fertiliser is applied ‘down the spout’ and sits too close to the seed. It is a particular risk in rough, dry seedbeds where fertiliser does not dissolve, so scorches developing roots. “We’ve seen a few cases this year where crops have blown over in windy weather due to a lack of root anchorage on one side caused by root scorch.”

Another popular talking point was the trial looking at undersowing maize with grass to reduce erosion and build soil health. The technique is increasingly popular, but there are concerns that residues from sulfonylurea herbicides could adversely affect grass establishment.

An informal trial in 2020 did not show any significant adverse effects, but a more detailed investigation this season suggested some negative impact could be occurring.

Maize plots were sown as normal in spring and treated with two herbicide mixes, containing mesotrione and either nicosulfuron or prosulfuron, both of which are SU chemistry. A Zocon Greenseeder drill was then used to undersow a Westerwold Italian ryegrass mix between the maize rows at 20kg/ha six weeks after drilling.

“Some of the undersown grass has been a bit disappointing this year,” Mr Clark admitted. “It appears the dry conditions early in the season meant herbicides lasted longer in the soil and when rain eventually came, it activated the chemistry. Some yellowing in the grass was clearly visible as it took up herbicide.”

Grass grew best where straight mesotrione had been applied, indicating that it was the SU element that had the main effect, he added.

“Undersowing research is definitely still work in progress, but that’s what trials are all about.”

The work could require growers to re-evaluate the herbicides used when undersowing maize, and the species of grasses sown, as their susceptibility to herbicide damage can vary.

Trials next year will experiment with different grass seed mixes to see which offer greatest tolerance to any potential impact from SU residues- fescues for example are thought to be more tolerant.

This year, 10 varieties grown under film are being compared, with some varieties also sown in the open.

Mr Clark said popular varieties like Prospect, Cardiff and Pioneer 7034 all looked good, but one of the most exciting was a new coded variety not yet commercially available. “It looks noticeably bigger than the other varieties and seems to have real yield potential, so it’s definitely one to watch.”
With maize harvest getting underway earlier than normal this season, Mr Clark pointed out that in many situations, cobs were reaching maturity before foliage was senescing.

“It’s the cobs that contain the starch and energy, so once they are ready it is time to get the crops off, even if the plants are still green. We’re also seeing many cobs are fairly well up the plant this year, so don’t hang about with harvest as there could be a greater risk of crops being blown over in more windy conditions.”

Mr Clark expected the Carlisle maize plots to be harvested around the end of September into early October and said yield and quality results would be analysed over the autumn. 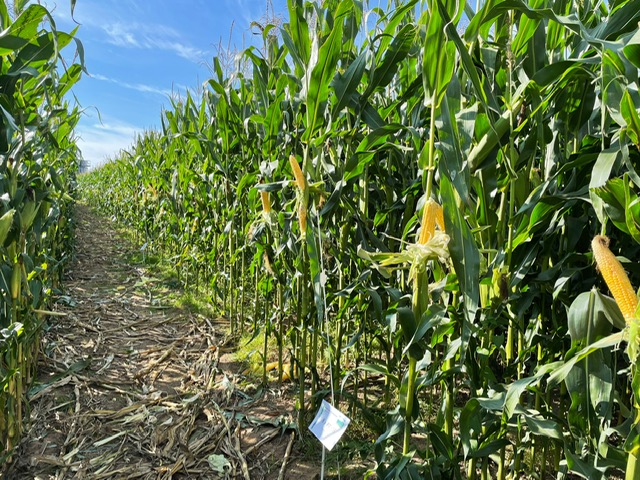 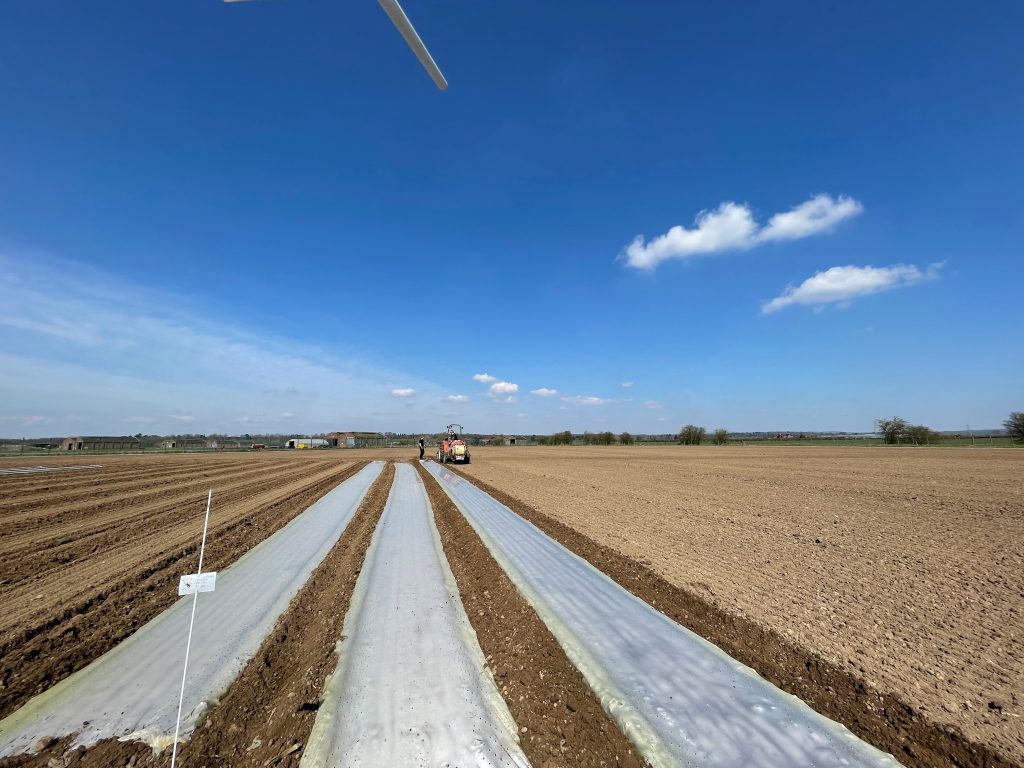 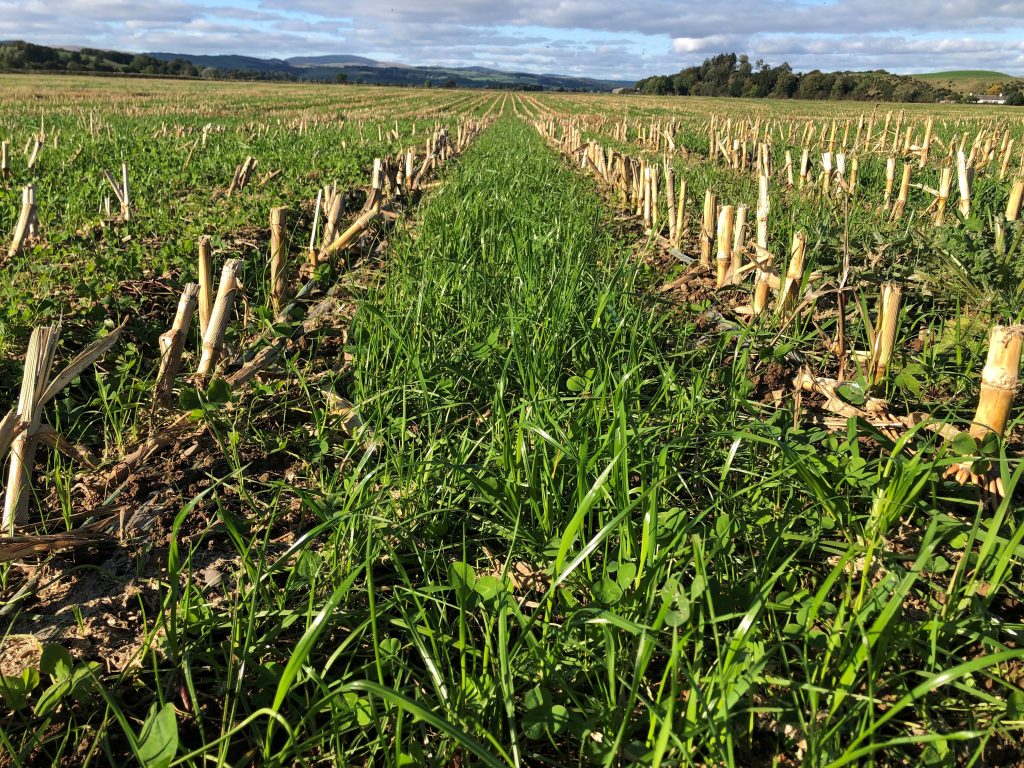