Innate defences against disease come at a hefty price to the plants themselves ...

CPM finds out how a novel biostimulant mitigates this cost using plant metabolites to prime plant defences and nutrients to sustain them. The link between plant health and nutrition is well known, but the detail is often overlooked. There’s a complex relationship between disease susceptibility, the metabolic processes involved in plant defences and individual nutrients, explains John Haywood, director of Unium BioScience.

“At a time when crop protection products are disappearing at a faster rate than new ones can gain approval and resistance in some important fungal pathogens is compromising fungicide performance, understanding the factors that affect the crop’s own metabolic priorities is becoming increasingly important. Armed with this knowledge, it’s possible to support plant physiology in ways that don’t rely solely on fungicide chemistry,” he says.

“According to the award-winning US scientist, Dr Don Huber, ‘disease can alter plant nutrition whilst plant nutrition can alter disease severity.’ In other words, by understanding what happens nutritionally in a plant when it’s under attack from disease, it’s possible to give the plant the nutritional help it needs to defend itself,” suggests John.

The relationship between nitrogen and disease is well established, with excess nitrogen known to produce lush growth that’s more susceptible to fungal attack. The role of potassium (K) perhaps isn’t as well recognised. Nutrients fall under two categories in plants, structural and regulatory.

Some can function as both (such as calcium) whereas potassium is primarily a regulatory element, he explains.

“Potassium is intricately linked with plant metabolic functions and growth. Its interrelationship with the various other nutrients within both the plant and soil, provides ample opportunity for potassium use to modify disease resistance or susceptibility.”

One of the functions of potassium is to affect plant host defence mechanisms, with the accumulation of inhibitory amino acids, phytoalexins, phenols, and auxins around infection sites all dependent on the mineral, explains John.

“Like most things in nature, optimal metabolic function in plants is all about balance. Nitrogen needs to be balanced with potassium – disease susceptibility generally increases with higher nitrogen-to-potassium ratios. Some diseases that are made worse by too much nitrogen may at least be partially reduced by increasing potassium nutrition.

“But potassium doesn’t just activate metabolic host responses, it has a key role in the plant’s physical defences –– promoting thicker outer walls in the epidermis which decreases the susceptibility of leaf tissues to penetration by pathogens.”

“In normal conditions the ISR system is ticking along at a low level and when an infection occurs there’s a hormone cascade which initiates the HR. This then triggers the SAR system to fire up, shutting down the ISR pathway.

“In both SAR and ISR responses the outcome of the cascade is similar, resulting in increased production of phytoalexins and pathogenesis-related proteins. The main difference is in response time, magnitude and duration,” he explains.

“SAR induction in plants causes a down-regulation of biological processes, such as growth and seed/fruit production, and most of the plants energy resources are directed towards the defence response.”

It’s the intense energy resource required to maintain the SAR that is a problem for crop plants. “A plant will tolerate a certain degree of damage as long as it isn’t detrimental to its reproductive survival. But growing crops is about more than plant survival and achieving seed production, crop plants have to sustain growth for as long as possible so that the crop achieves optimum yield and the desired quality.”

What if it were possible to support crop plants to help them maintain an enhanced and prolonged innate response to disease attack? Unium director, Dr Nigel Grech, believed this was achievable so began to investigate how to support the metabolic pathways involved in defence mechanisms without robbing the plant of the crucial energy it needed to continue to grow.

“Plant metabolism has a multi-layered approach to defence. Both primary and secondary metabolism are involved to different degrees. Supporting both of these will help to manage overall crop health and reduce disease infection and severity,” he says.

Taking the research and turning it into a product that had a consistent effect didn’t happen overnight, it took ten years to find the optimum formulation. Eventually Nigel developed a unique complex which contains six plant metabolites plus supporting nutrients – potassium, manganese, zinc, an unusual foliar-acting form of sulphur (which supports a defence pathway known as sulphur-induced resistance), and finally a carefully balanced amount of nitrogen.

Nigel explains that the concept behind the biostimulant-nutrient complex is to upregulate the plant’s defence systems so that it can better withstand disease.

“The six metabolites support 14 different metabolic pathways – all with key roles to play in nutrient balance, plant defence mechanisms or stress management. As plants become nutritionally unbalanced, their ability to coordinate a rapid defence response is impaired and they become more susceptible to biotic and abiotic stress.

“This illustrates that maintaining nutritional stoichiometry (balance) is critical for plant health. Many factors contribute to this, such as a healthy endomicrobiome (analogous to a healthy gut flora in humans) which plays a huge role in mediating nutrient acquisition, delivery and remobilisation,” he says.

So that’s the theory but when it’s put to the test, does the concept actually work?

Once the formulation was finally perfected the coded product USB007 (later to be named Scyon), was tested in glasshouse experiments at University of Nottingham by Dr Steve Rossall. He has carried out six pot experiments over a four-year period to assess its performance on plants infected with yellow rust and septoria (using azole insensitive isolates to represent field conditions).

“The best effects were seen where Scyon was applied before the plant was inoculated with disease, where it appears to enhance the activity of fungicides applied with it,” he comments.

In the trials Steve looked at both old and modern chemistry and found responses from the addition of Scyon across the board.

Further work has been carried out by Dr Tom McCabe of University College Dublin, where the trials have moved out into the field for the past two years. Tom runs the trials programme for Prime Crop Research in East Anglia and he’s looked at the effects of Scyon in fungicide programmes at four sites in Norfolk, Suffolk and Essex.

“We’ve seen interesting trends in the results, with the biggest overall response from adding Scyon to fungicides in 2019, which was a moderately high disease season in East Anglia after heavy June rainfall,” he says.

Tom highlights that disease control from programmes using SDHI chemistry was very variable that season, which he puts down to the presence of resistant strains of septoria.

Fungicide performance held up better where a multisite was included, with good efficacy from chlorothalonil and folpet also putting in a good performance.

“There was a consistent trend for improved fungicide efficacy where Scyon was included, particularly when a multisite wasn’t used within the programme.”

Even though fungicide performance made up for the omission of folpet in the mix in trials, Tom doesn’t advocate dropping the multisite. He sees Scyon as a useful add-on which can help the performance of fungicides, especially when they come under pressure.

Pioneers in the field Scyon is one of the biostimulants that has been through the Hutchinsons’ screening process which takes place at University of Nottingham. David Howard, head of Integrated Crop Management at the agronomy company explains the glasshouse trials provide some insight into the inherent activity of biostimulants, which is much more difficult to assess in the field.

Hutchinsons’ agronomy teams have had access to Sycon for the past two seasons and David used it on some crops in his Lincolnshire /Nottinghamshire region in 2020. He describes it as ‘interesting.’ 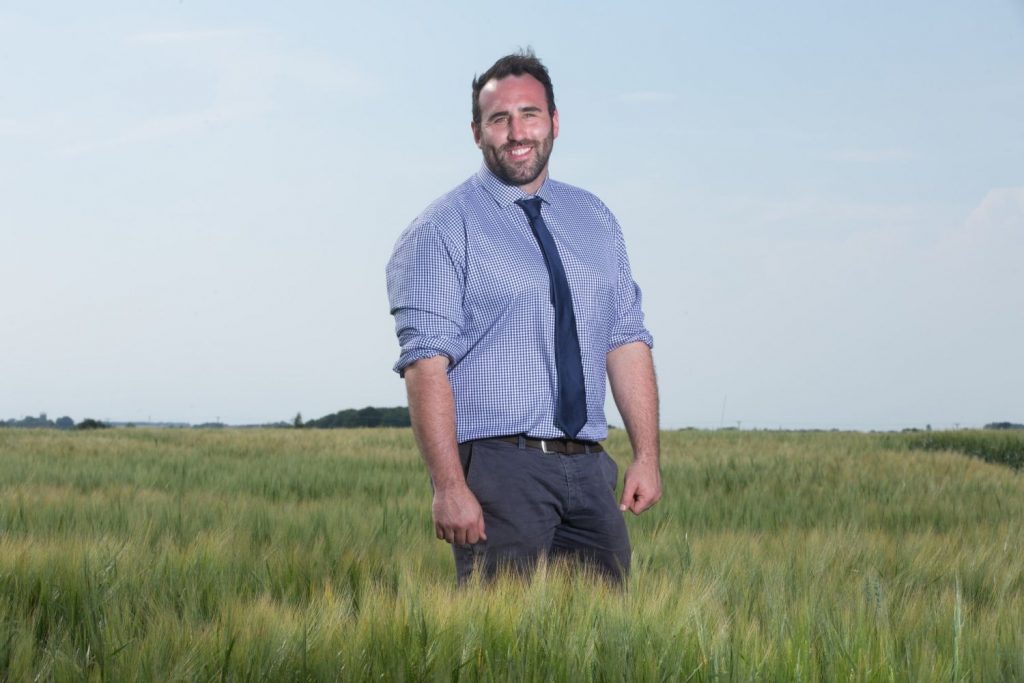 “Scyon basically turns on plant disease resistance ahead of the disease attack. This means its innate defence response is at its peak when the pathogen arrives and therefore is able to fight disease before it gets a foot-hold in the crop.”

David also believes Scyon could form a useful part of anti-resistance strategies. “It works to reduce disease in a completely different way to a fungicide, providing an alternative means to help manage disease.

Fungicides are active on the disease pathogen whereas Scyon has no fungicidal activity and works on the plant to strengthen its defences, not the disease itself.

“Where a multisite can help protect a single-site fungicide’s mode of action, Scyon can support the plant’s own defences,” he explains.

“We advise using Scyon with a fungicide for optimum activity because plant defences can’t offer complete control, particularly if disease builds up on a leaf and plant resistance breaks then infection can rush through the crop pretty quickly.”

Improved disease management from using Scyon has been seen consistently in Hutchinsons’ trials and has been particularly beneficial where the fungicide program has been reduced, adds David. Even though septoria has been the focus in most of the work, good information is now coming through on both yellow and brown rusts, where trials show that Scyon seems to help improve control.

Hutchinsons’ have found the benefits of Scyon to be repeatable in the field and positive results are now emerging in other crops including light leaf spot in oilseed rape and ramularia (when used in conjunction with folpet) in barley.

The nutrients in the Scyon formulation deliver a minimal quantity but tissue testing has shown a big increase in some elements, explains David.

“The Scyon seems to uprate nutrient uptake and we’ve seen increases in elements such as manganese and zinc, which could be particularly useful in early spring when growth is rapid.”

The current thinking is that most benefit can be gained by applying Scyon early in the season at the T0 timing, before the onset of most disease, says David. He also believes the pricing of Scyon won’t be a barrier to its use, as it can be with some other biostimulants products.

“In the lab testing we found that once the host plant defences were switched on, they remained active for the remainder of the experiment. In the field other stress factors may come into play, possibly reducing its longevity which is why a fungicide partner is recommended.”

David sums up by saying the thinking behind the product is very clever. “Plant defences are very costly in terms of energy to the plant –– if these are active 24/7 then the plant would exhaust itself. While Scyon upregulates plant defences, it also turns on the plant’s stress reduction mechanisms and provides key nutrients so the plant can keep defences activated for longer without cost.”