Converting a standard land metered drill into a variable rate drill has never been easier or more affordable with the launch of a new variable drill conversion kit, Omnia E-Seed...

Developed by leading crop production specialists Hutchinsons, Omnia E-Seed is the first stand-alone variable rate drill conversion kit that fits to any standard drill and does exactly what it says on the box – it enables a standard land metered drill to be converted simply and efficiently into a variable rate drill.

“We know that growers are increasingly looking to variable rate drilling to lift crop performance, as well improving the efficiency of their seed and nutrition inputs. However the cost of investing in a new variable rate drill which can cost circa £40,000 upwards has been a barrier to many growers moving over to a variable approach,” says Oliver Wood, precision technology manager for Hutchinsons.

“If there’s a perfectly good drill in the shed, but it just doesn’t offer a variable rate option, it can be difficult to justify the cost of replacing a good machine.”

“But with Omnia E-Seed, we are now able to offer an affordable way of moving over to variable rate drilling without investing large amounts of money – we have calculated that it is possible to recoup the costs of Omnia E-Seed in just 48ha, working on a 0.6t/ha improvement using a variable approach.

Mr Wood acknowledges that over the last two very wet and challenging autumns conditions have hampered drilling particularly if using one of the newer, larger variable rate drills. “However, there may be an older, smaller and lighter drill on the farm that could be used, but it doesn’t have variable rate capacity.”

“This no longer needs to be an issue as the Omnia E-Seed box can be easily fitted to the land metered wheel of the old drill, and drilling can continue.” 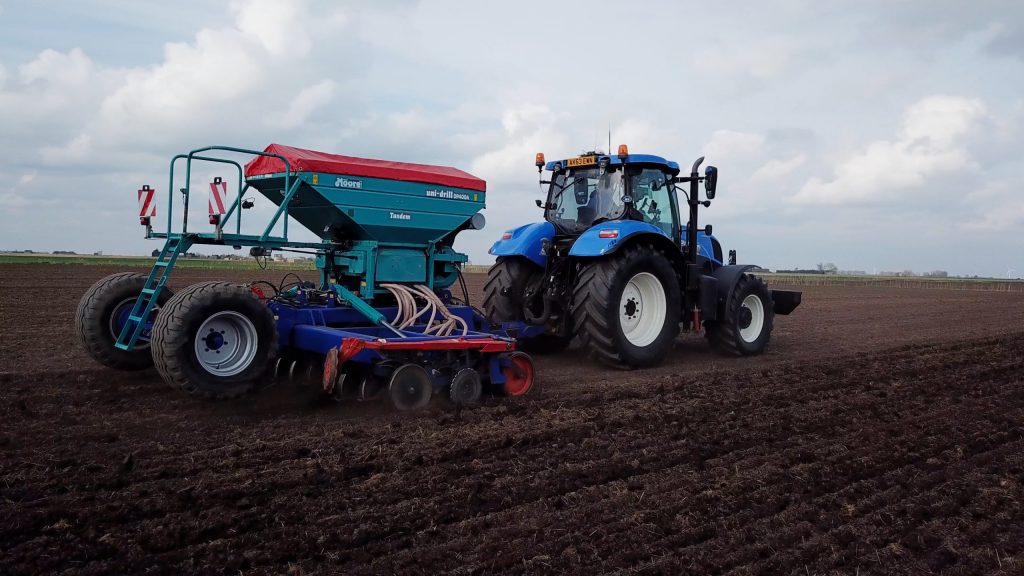 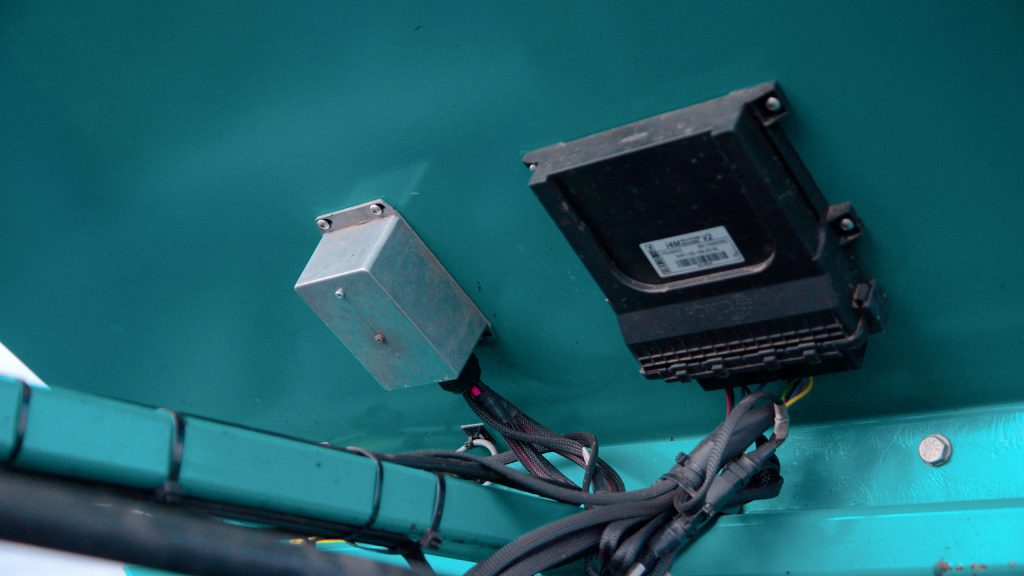 The box can be fitted to any seed drill, irrespective of age

“The kit comprises of a motor which bolts on and replaces the land wheel, the sensors fit virtually into the same holes of the original drill. All control is via an iPad which talks to the box, so once variable rate plans are uploaded onto the iPad, they can be seamlessly sent wirelessly to the box.”

The Omnia E-Seed kit has been tested and validated at the Hutchinsons Helix farms and is available this spring.

A key part of the development of Omnia E-Seed has been to work closely with growers who have trialled the system and adapted it to its present form.

Harry Horrell of Pode Hall Farm, Thorney in Cambridgeshire farms 485 ha’s in a rotation of oilseed rape, spring beans, maize for AD and spring linseed. Having moved back to the family-run farming business over twelve years ago, there has been a move away from ploughing to all direct drilling today.

About 18 months ago Harry wanted to go down the variable rate drill route. 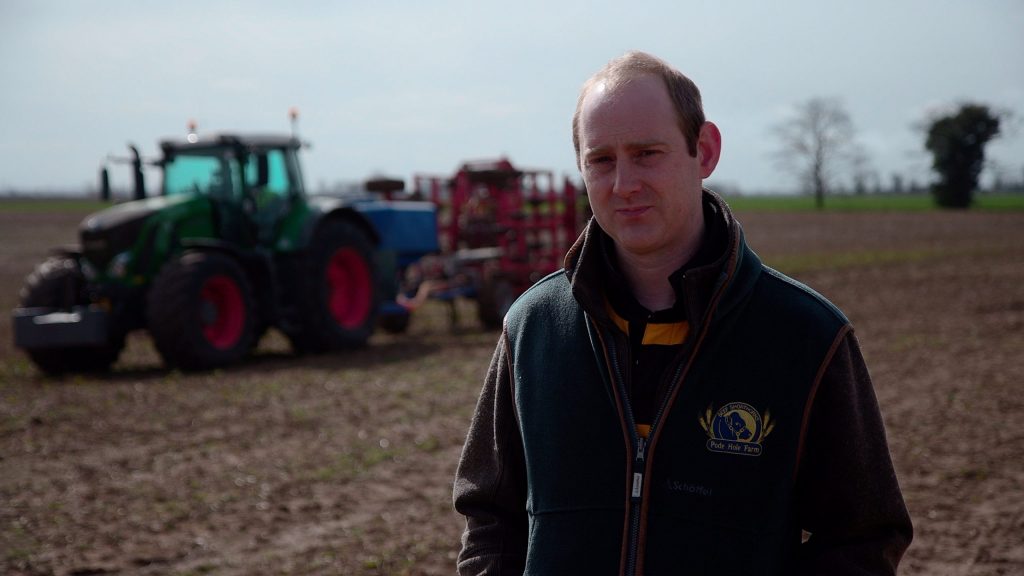 “We had a Horsch C06 drill but couldn’t convert our old Horsch box into variable rate so we talked to the Omnia team and between us designed a separate variable rate unit, the Omnia E-Seed kit.”

“Fixing the kit to the drill was as simple as unbolting the land wheel, bolting on the box and wirelessly connecting to the iPad, which didn’t take more than a morning to do,” he points out.

“Variable rate plans that were generated in the office were easily uploaded to the iPad using Connect & Go and that was it – we had a very cost-effective way of converting our existing standard drill into one with variable rate capacity. We had saved ourselves the best part of £100,000 for a new drill!”

“We have definitely seen an improvement in crop establishment using the variable rate approach, the stand across fields is more even as we have been able to battle black-grass spots and areas of high slug pressure by increasing the seed rate in these areas.”

Jonathan Roberts of Morley Farm, Warboys has trialled the Omnia E-Seed kit and has been really pleased with the ease and use of the system.

We were looking at moving over to variable rate capacity, the main reason for this was profitability- we were looking for better crop establishment, which is equal to better yields and increasing our gross margin at the end of the day.

“Our agronomist Andrew Cromie of Hutchinsons suggested we try Omnia E-Seed. Using a drill conversion kit was attractive as we would be able to use our old drill and bring it up to 21st Century technology.” 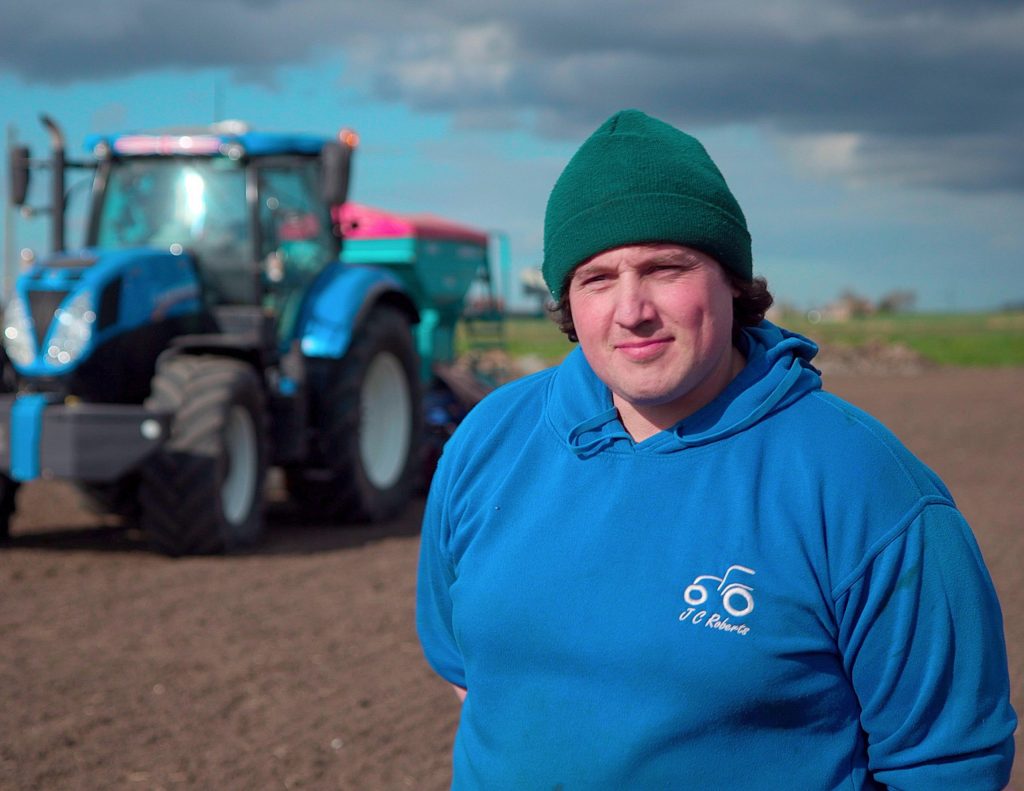 “The kit is was simple and easy to fit, we just fitted the motor onto the back to replace the drive unit or land wheel, the sensors fitted in virtually in the same holes of the original holes of the previous sensors, we set the app up, and off we went.”

“The iPad side of things is really straightforward to use, you don’t have to be technically minded to operate it, there’s only a few buttons to use. “

“It has given us a greater flexibility with drilling its a lot easier to calibrate, I can take iPad out of the cab stand there and calibrate the drill there’s no more winding the handle several times and working it all out!”

“We can set our own rate and adapt it on the iPad in the cab, you don’t even have to have a variable rate plan. It’s also just as easy to turn off the variable rate functionality as it is to turn it on.”

Mr Roberts is using system for the second season and is really pleased with the results. “We certainly wouldn’t want to go back to a standard approach.”

“Walking the fields now, there is definitely an improvement in the crops. We have had a very wet winter and even in some areas of our wheats that traditionally would have struggled, the crops look really good.”

Contact us for enquiries and further information on Omnia E-Seed…

“We can set our own rate and adapt it on the iPad in the cab. It’s just as easy to turn off the variable rate functionality as it is to turn it on.”